Do or Do Not

The Science Behind the Magic of Star Wars

We've all been there: palms damp with sweat as you realize the Tantive IV is being chased by the biggest ship you've ever seen. Your hands grip the movie theater armrest as the Millennium Falcon jumps hyperspace. Your heart races as Luke Skywalker fires his torpedoes and the Death Star explodes...

Those moments are more than just great cinema or masterful storytelling, though they are both to be sure. They are also testament to the legacy of incredible technical innovation that has characterized Industrial Light and Magic for the past 40 years.

Originally created by George Lucas to bring his vision for the Star Wars to life, ILM was the first independent special effects house ever founded. Today, 15 Academy Awards, 29 nominations, and (most importantly!) a National Medal of Technology and Innovation later, they are still leading the charge to find new, surprising, and ever more realistic, yet fantastical ways to push the limits of cinematic storytelling.

In their four decades of work, ILM has completely changed the the way movies are made and the way we watch them. They have figured out ways to move special effects from the periphery to the heart of modern filmmaking. In doing so, they have not only created galaxies far, far away, they have populated them with a weird, wonderful, somehow utterly lifelike cast of characters.

And they've done it all through creativity, innovation, and willingness to attempt things no one thought were possible. All of it was done in spirit of creative collaboration and a desire to tell the best stories they possibly could. As special effects pioneer and one of the founders of ILM, John Dykstra, once said, “We would paint ourselves into a corner and have to invent our way out of it.” 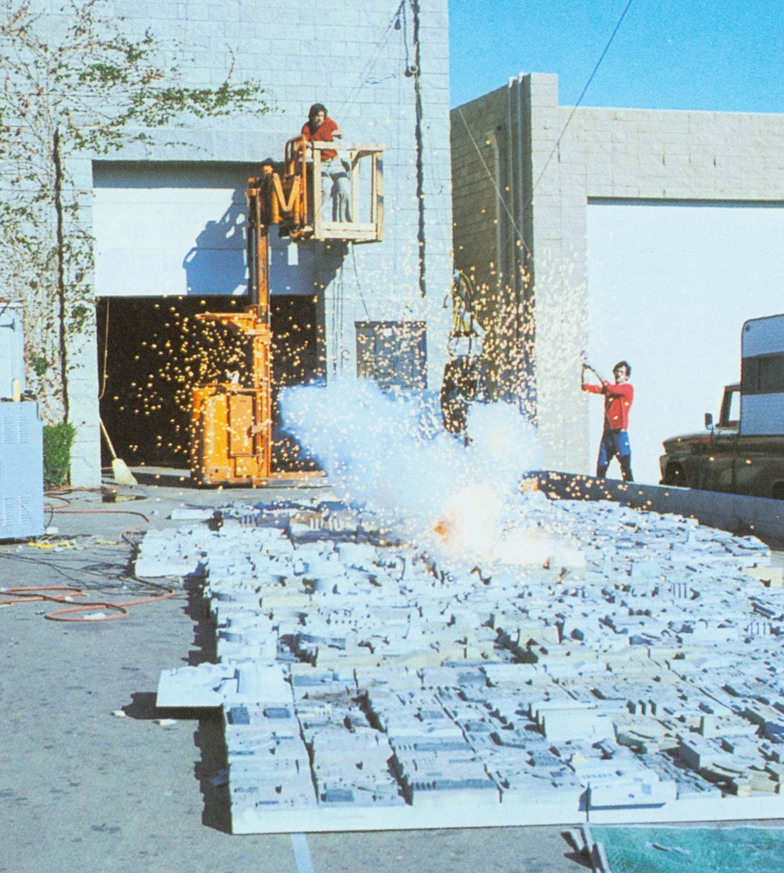 And so they did! Every single one of ILM’s movies has done something no one thought was possible, often using techniques or technology that had previously been thought of as impossible, not worthwhile, or simply insane. But the cumulative effect (no pun intended) has inspired a love of storytelling, and a deep interest in science and technology in people all over the world. The release of the seventh installment in the Star Wars saga this week seems like as good a time as any to look back at just a few of the game-changing effects pioneered by ILM.

The biggest, seemingly insurmountable challenge that Lucas faced was his desire for scenes that included special effects to be both realistic and dynamic. In 1977, special effects were mostly achieved using stationary cameras that could film a scene multiple times (actors, models, etc) from the same angle. Even then, the effect wasn’t very convincing. Because camera movement could not be precisely controlled, the special effects were relegated to shots created from a single vantage point.

For Episode IV: A New Hope George Lucas wanted a way to follow spaceships into battle. He felt that to be engaging, the film needed to create a sense of the speed and movement involved in shooting lasers out of a ship hurtling through the stars. It was seen as widely impossible, but Lucas was emphatic: ILM had to find a way to make it work.

At that time in 1977, computers were anything but common, so when ILM initially proposed using them to control camera movements, many shrugged it off. Undeterred, John Dykstra and a team of engineers created the Dykstraflex, the first computer controlled camera capable of duplicating camera paths and angles multiple times with incredible precision.

It was unlike any battle scene that had come before. Here were the X-Wing fighters in exactly the epic battle Lucas had envisioned. They flew through the trenches at incredible speeds and the camera flew with them it would have been impossible without the ability of the Dykstraflex to record the same scene over and over with miniatures and models, but also live actors, and with little to no errors.

Go-Motion™ technology was developed three years later to solve a similar problem facing the crew of The Empire Strikes Back. ILM needed a way to film the AT-AT walkers during the famous battle scene on the ice planet Hoth without having their motions seem clunky or unrealistic. Effects of this sort has always been done using stop motion animation, but that wouldn’t do for Lucas’ vision.

ILM’s response was to create their own, much more realistic style of animation which they lovingly termed ‘Go-Motion™.’ Like the Dykstraflex, Go-Motion™ relied on computers to control the motion of the puppets and miniatures. That meant that the characters could move several times in any one frame, allowing their movements to be captured with a true-to-life motion blur effect.

NOW THIS IS PODRACING!”

ILM continued to explore ways to marry computers to visual storytelling when for Episodes I, II, and III they introduced the world to its first taste of real actors interacting with entirely computer generated characters. Though fans had a somewhat mixed reaction to Jar Jar Binks, the paradigm shift that his character signaled has led to ILM’s revolutionary Imocap system.

This innovative system allows filmmakers to digitally record every movement, facial expression, and slight tick of an actor’s performance and then map it onto a digital character. This week’s release of The Force Awakens finds this technology applied to bring Lupita Nyong’o’s character of Maz Kanata (an alien pirate--possibly the coolest job description ever) to life.

Getting a computer rendered character to reflect the real-life movements and emotions of a human actor is nothing to sneeze at, but before that was possible, the team at ILM had to figure out a way to map real life textures and landscape images onto computer simulated 3D objects. Their solution, known as texture mapping, brought the canyon walls and alien terrains of Tatooine to life during the pod race scene in The Phantom Menace

Crucially, some of their effects are so real, you probably don’t even realize they are effects.

The dizzying reality and excitement of that scene, however, paled in comparison to the excitement fans felt upon seeing a fully realized Yoda character in Episode II. Fans had been waiting for nearly two decades to see the legendary Jedi master in action, and his fight scenes in that movie did not disappoint. It was all made possible through ILM’s cutting edge understanding of fluid dynamics. That not-so-simple principle of physics deals with how fluids--like air, water, and even fabric--move. By finding a realistic way to apply those complicated laws of motion to Yoda’s flowing robes, ILM was finally able to let Yoda fight, run, and come to life as fully as possible.

“NEVER TELL ME THE ODDS!”

It was not just Star Wars that changed movies; virtually every film ever touched by ILM (and there are over 300 of them to date) has included major firsts and technological breakthroughs. From the eerie and realistic form of the T-1000 in Terminator 2 to the realistic skin and fur of the monkeys, elephants, and rhinos in Jumanji to the daring dog fights of Pearl Harbor, ILM has pushed the boundary in some very big ways.

Crucially, some of their effects are so real, you probably don’t even realize they are effects. The ping pong scene in Forrest Gump? No, Tom Hanks did not suddenly become amazing at ping pong, those are CG ping pong balls! ILM was also the first to prove that it was possible to convincingly change small details of a scene without altering its reality. The next time you see a beautiful sunset or perfect beach in a movie, it may very well be the result of the incredible computer graphics skills first pioneered by ILM.

Perhaps even more impressive is ILM’s reach beyond the movie screen. The sci-fi tech they’ve dreamed up, from holograms to bionic limbs, has found its way into the real world marketplace.

Their refusal to acknowledge anyone’s perceived limits of possibility has forever changed the way we tell and watch stories unfold on the big screen.

Plastic surgeons use modeling software developed during The Incredible Hulk to practice cleft lip surgeries that save thousands of children every year. Used Photoshop recently? That was an ILM spin off, developed by Visual Effects Supervisor and Chief Creative Officer John Knoll and his brother after Knoll became fascinated by the possibilities that digital editing software could unlock. Teared up at a Pixar movie? Pixar began as the computer animation division of ILM before being spun off into its own company.

Steven Spielberg once quipped that if ILM had run the space agency we'd have colonized Mars by now. It might sound far fetched, but it's likely that he's not wrong. ILM has become known for fostering a culture of innovation and creativity. Their refusal to acknowledge anyone's perceived limits of possibility has forever changed the way we tell and watch stories unfold on the big screen.

And who could possibly discount the almost innumerable scientists, engineers, and computer enthusiasts who were inspired by what they saw on the big screen? ILM's movies have already inspired a generation of science professionals and enthusiasts alike, it's almost certain that this next generation of Star Wars films will do the same thing.